This article explains how to connect MySQL database system via SSH through a Firewall. A large percentage of databsae users are using SQL Server, MySQL, PostgreSQL and others on a web server hosted by an ISP. Most hosting providers block port 3306 (the MySQL server port) at the firewall, preventing outside access to MySQL. This is an important security practice and you should be very concerned if your ISP does not block port 3306. In this article I will demonstrate how to connect the Nucleon Database Manager, including MySQL Administrator, to a remote server using SSH port forwarding.

SSH stands for Secure SHell and is typically used as an encrypted version of telnet. SSH allows you to access a remote server’s shell without compromising security. In a telnet session all communications, including username and password, are transmitted in plain-text, allowing anyone with adequate resources to listen-in on your session and steal passwords and other information. Such sessions are also susceptible to session hijacking, where a malicious user takes over your session once you have authenticated. SSH serves to prevent such vulnerabilities.

OpenSSH, the tool included with most Linux variants, is described as follows in the OpenSSH FAQ at http://www.openssh.org/faq.html#1.1 :

“OpenSSH is a FREE version of the SSH suite of network connectivity tools that increasing numbers of people on the Internet are coming to rely on. Many users of telnet, rlogin, ftp, and other such programs
might not realize that their password is transmitted across the Internet unencrypted, but it is. OpenSSH encrypts all traffic (including passwords) to effectively eliminate eavesdropping, connection hijacking, and other network-level attacks.”

What is SSH Port Forwarding

Requirements for SSH and MySQL

To perform port forwarding between a Nucleon Database Master and the MySQL server, you will need a SSH login account for port forwarding. This account needs to either be located on the server running MySQL, or on a machine that can be accessed remotely via SSH and which in turn has network access to the MySQL server.

For this article we will be using Putty, an Open Source SSH client application written by Simon Tatham and available at http://www.chiark.greenend.org.uk/~sgtatham/putty/download.html . Linux users should have a command-line SSH client already installed.

We will first need to configure a Putty session for port-forwarding. Our first step is to configure Putty to connect via the SSH protocol and specify the server address: 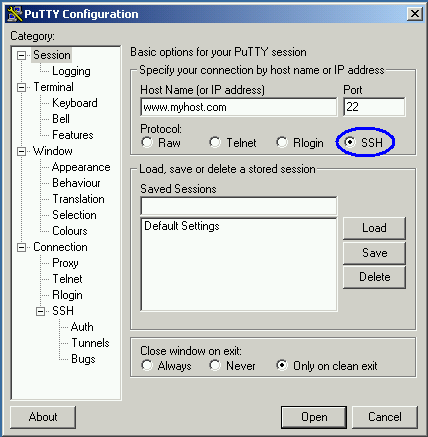 Once we have configured our host and protocol, we can move on to configuring the SSH tunnel. To create an SSH tunnel, we specify a destination host and port: 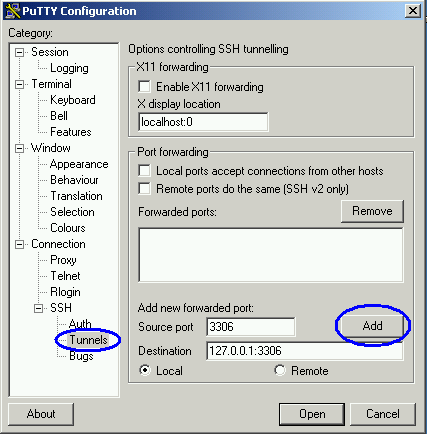 In this example, we are specifying that port 3306 on our client machine should be forwarded to port 3306 on the remote server. You can also forward data from a local port number that is different than the remote port number. For example, on my development machine I keep a local copy of MySQL running on port 3306. On my production server I also run MySQL on port 3306. I can configure port forwarding with port 3306 as the local port, but all traffic on port 3306 will be intercepted and forwarded, making the local copy of MySQL unreachable. If I change the source port setting to 3307, I can access the remote server through port 3307 and the local server through port 3306.

Once we have added our port forwarding directives, we can then save the session to make it available for repeated use. In the session menu specify a saved session name and click save to add this to the list of saved sessions: 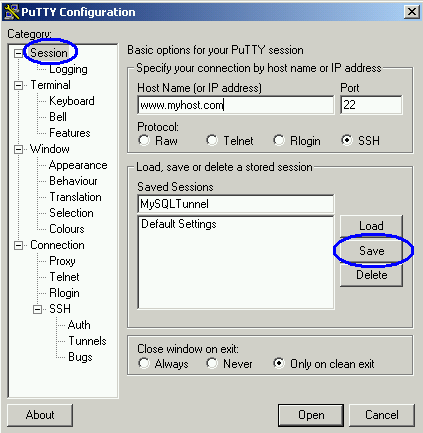 Once you have created and saved your session, you can add a shortcut to your desktop to quickly access port forwarding. Right-click on your desktop and choose New> Shortcut. Configure the shortcut and assign the target as /path/to/putty/putty.exe -load sessionname. In the example above, with putty at C:\putty.exe and the profile saved under the name MySQLTunnel, you would assign the shortcut target to be:

Once SSH port forwarding is established, open your client application (I will use the MySQL Query Browser in this example). 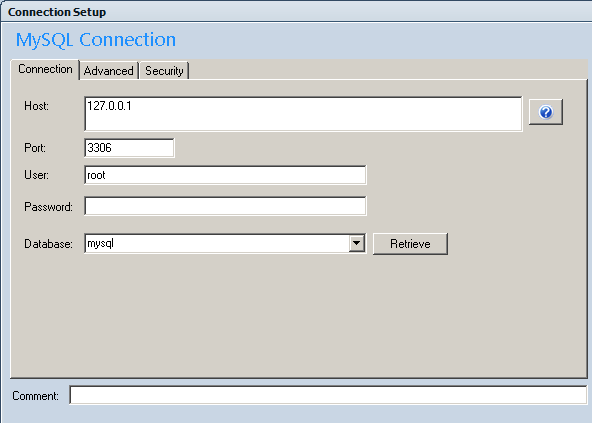 Set the server host to 127.0.0.1, using port 3306 (unless you configured a different port for your tunnel to prevent conflicts with a local copy of MySQL).

When you connect, Putty will act as a proxy and the client will connect to the remote copy of MySQL through the ISP’s firewall. As an added benefit, these communications will be protected by the encryption capabilities of SSH, preventing third parties from eavesdropping on your MySQL session.

SSH port forwarding is a valuable tool for communicating with remote MySQL servers securely, especially when the remote server is protected by a firewall. While an SSH account on the remote server is required, many ISPs are willing to provide one. SSH port forwarding can be used to protect all MySQL client sessions, including Database Master, MySQL Administrator, mysqldump, etc.

BI is not only Reporting. BI platforms enable users to build applications that help organizations learn and understand their business. Gartner defines [1] a BI platform as a software platform that delivers the following 12 capabilities:

BI infrastructure — All tools in the platform should use the same security, metadata, administration, portal integration, object model and query engine, and should share the same look and feel.

Metadata management — This is arguably the most important of the 12 capabilities. Not only should all tools leverage the same metadata, but the offering should provide a robust way to search, capture, store, reuse and publish metadata objects such as dimensions, hierarchies, measures, performance metrics and report layout objects.

Development — The BI platform should provide a set of programmatic development tools — coupled with a software developer’s kit for creating BI applications — that can be integrated into a business process, and/or embedded in another application. The BI platform should also enable developers to build BI applications without coding by using wizard-like components for a graphical assembly process. The development environment should also support Web services in performing common tasks such as scheduling, delivering, administering and managing.

Workflow and collaboration — This capability enables BI users to share and discuss information via public folders and discussion threads. In addition, the BI application can assign and track events or tasks allotted to specific users, based on pre-defined business rules. Often, this capability is delivered by integrating with a separate portal or workflow tool.

Dashboards — This subset of reporting includes the ability to publish formal, Web-based reports with intuitive displays of information, including dials, gauges and traffic lights. These displays indicate the state of the performance metric, compared with a goal or target value. Increasingly, dashboards are used to disseminate real-time data from operational applications.

Ad hoc query — This capability, also known as self-service reporting, enables users to ask their own questions of the data, without relying on IT to create a report. In particular, the tools must have a robust semantic layer to allow users to navigate available data sources. In addition, these tools should offer query governance and auditing capabilities to ensure that queries perform well.

Microsoft Office integration — In some cases, BI platforms are used as a middle tier to manage, secure and execute BI tasks, but Microsoft Office (particularly Excel) acts as the BI client. In these cases, it is vital that the BI vendor provides integration with Microsoft Office, including support for document formats, formulas, data “refresh” and pivot tables. Advanced integration includes cell locking and write-back.

OLAP — This enables end users to analyze data with extremely fast query and calculation performance, enabling a style of analysis known as “slicing and dicing.” This capability could span a variety of storage architectures such as relational, multidimensional and in-memory.

Advanced visualization — This provides the ability to display numerous aspects of the data more efficiently by using interactive pictures and charts, instead of rows and columns. Over time, advanced visualization will go beyond just slicing and dicing data to include more process-driven BI projects, allowing all stakeholders to better understand the workflow through a visual representation.

Scorecards — These take the metrics displayed in a dashboard a step further by applying them to a strategy map that aligns key performance indicators to a strategic objective. Scorecard metrics should be linked to related reports and information in order to do further analysis. A scorecard implies the use of a performance management methodology such as Six Sigma or a balanced scorecard framework.

03.03.2016 – We’re pleased to announce updated releases for our brand new Database Manager 8 and BI Studio 8 products. This release adds many new database management features and some important improvements and bug fixes. We also removed the “LINQ to EF” feature because some version provider incompatibilities.

We re-designed the main window using Microsoft Office ribbon style and moved the some specific tools, buttons and commands to it is workbench.

Database Monitoring is merged to main tool so now you can call the monitors without external Window and Dialog.

With Database Manager 8 data export and import features are more stable and more powerful now. It supports most used file formats to export and data import from all data source connections.

We already extended the SQL and JSON Query engine and add some advanced and useful extension functions. Both query options allows to execute some pre-defined .Net extensions like OLAP Pivoting or ChrossTable, Math, Map/Reduce, DataTable Expressions and more extensions.